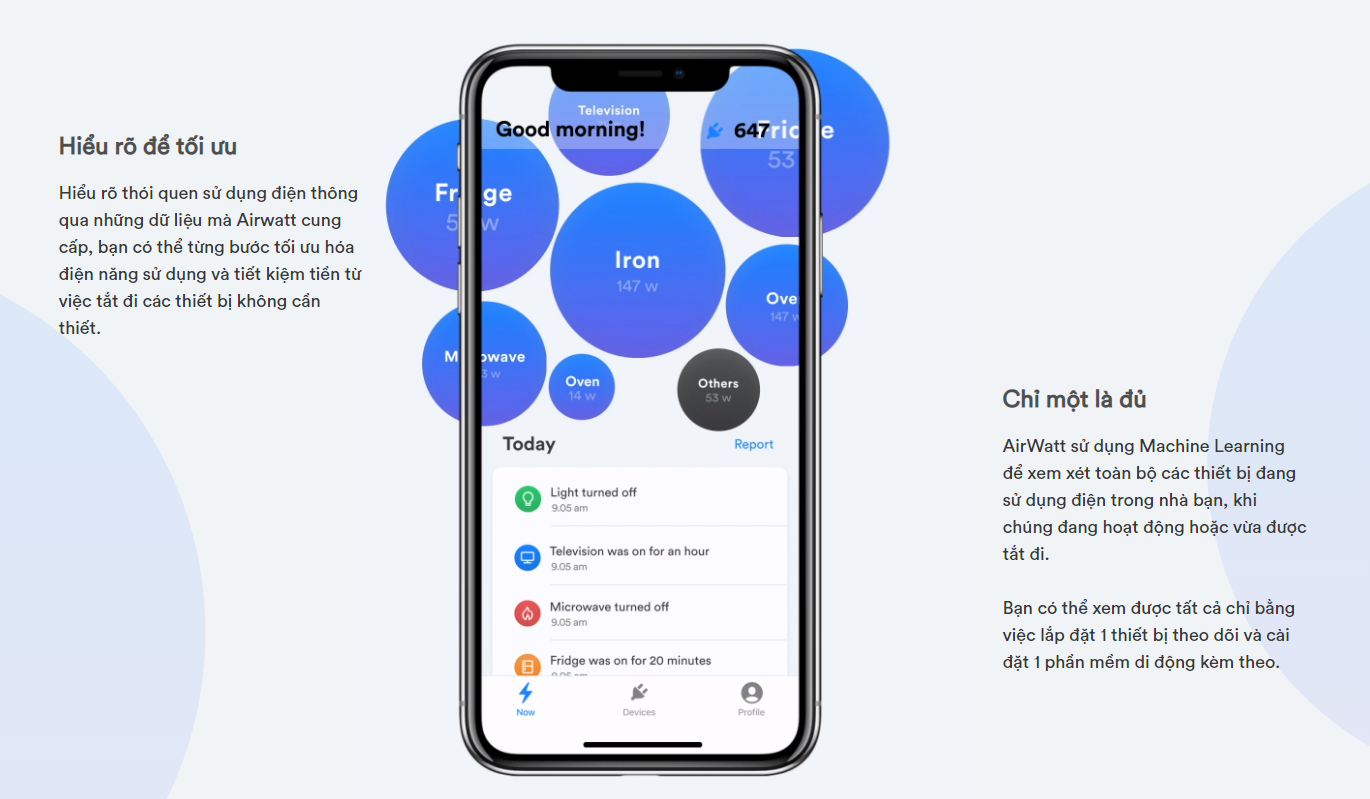 Airwatt is an IoT solution that integrates and monitors electricity usage using AI/ML. Powered by a monitor installed in an electric panel, Airwatt reads the electric current millions of times per second and processes that data to present an entire zone view. Airwatt is designed for quick installation and constant improvement. The screen utilizes sensors that read the electrical current, while AI utilizes data to figure out which device is on or off. The problem is hard to solve, yet, it's worthwhile and improved all the time. By tracking electric usage, Airwatt's vision is to help businesses check the usage status of electrical equipment. And then, they can save electricity and money, even avoid disaster.

Airwatt has the capability to handle hardware production and machine learning on their side. However, when it comes to building the MVP to visualize and nurture all the data, it's a real challenge with a lot of aspects:

Installing Airwatt is a straightforward process that generally takes less than 30 minutes for a licensed electrician to complete.

The mobile app is the only way to bring the Monitors online and bind them to the corresponding user accounts. The flow is pretty simple, all magic is handled at the System Design level. 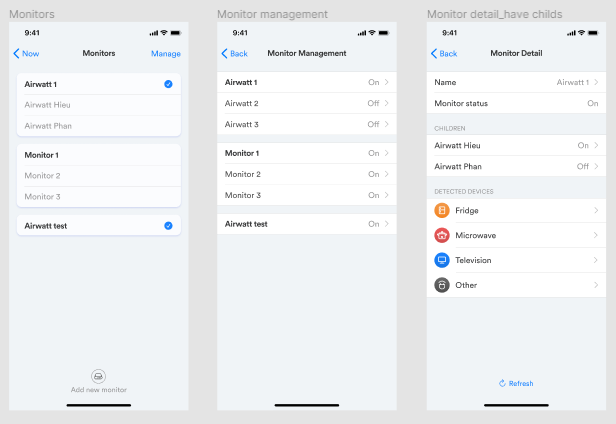 In order to help businesses save money, check the usage status of electrical equipment, and even avoid disaster, the Report feature is a must-have in the MVP. On the mobile apps, users could see the report within a week or the nearest three months. 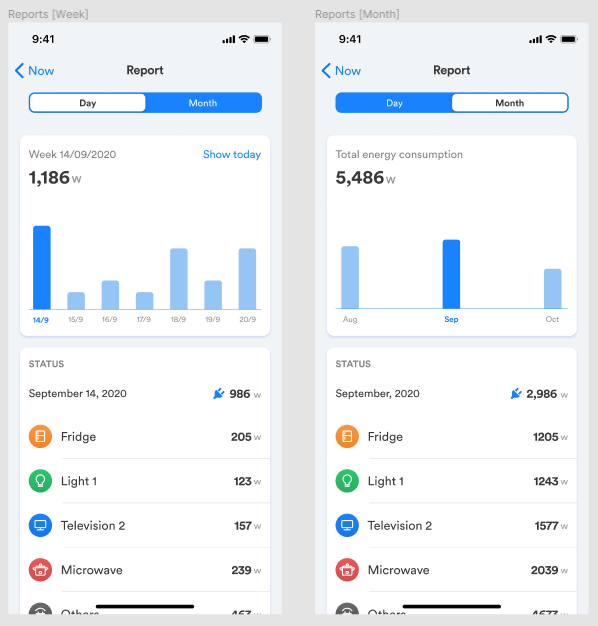 The business owners mostly use the web app for tracking data provided by Airwatt monitors. To help them control their electrical usage, we have added a few more features like comparing Weekly and Monthly reports. 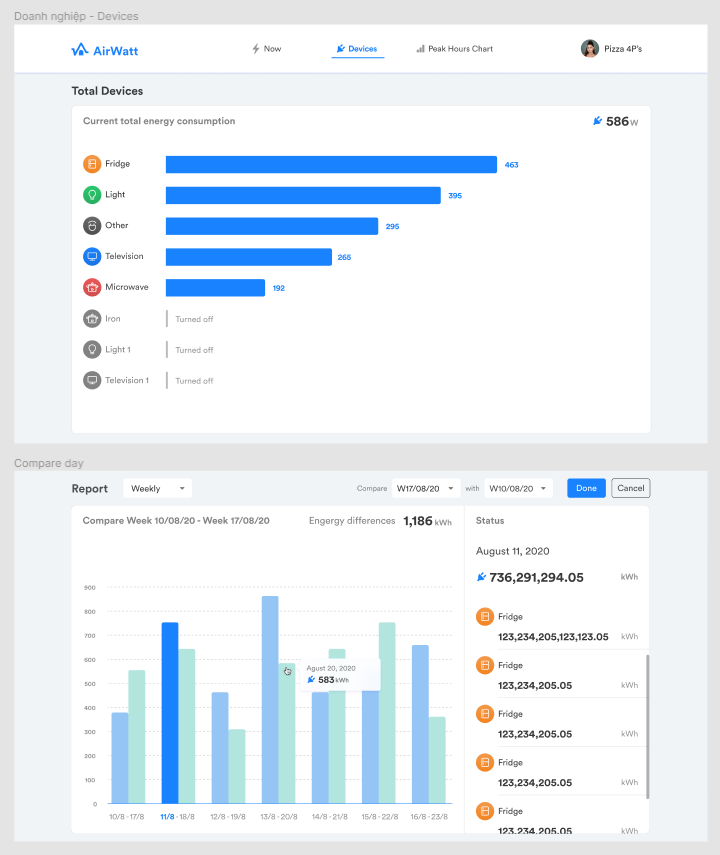 The short term in Airwatt's vision was to build an MVP(Minimum Viable Product) product for proving the product's concept. We built Airwatt's system from zero with other teams: Business, Hardware, and AI. We need to build our system as fast as possible and keep the bridge role. Airwatt system needs to process a huge of data at the same time. We have two separate systems, the first for CRUD data and the second for IoT data. The business team needs to sync all data to the AI system in real-time. The system then encountered a series of problems with design, architecture, and database. It took a while for us to analyze and find the optimal solution for the problems and reflects the end result in the high-level architecture below: 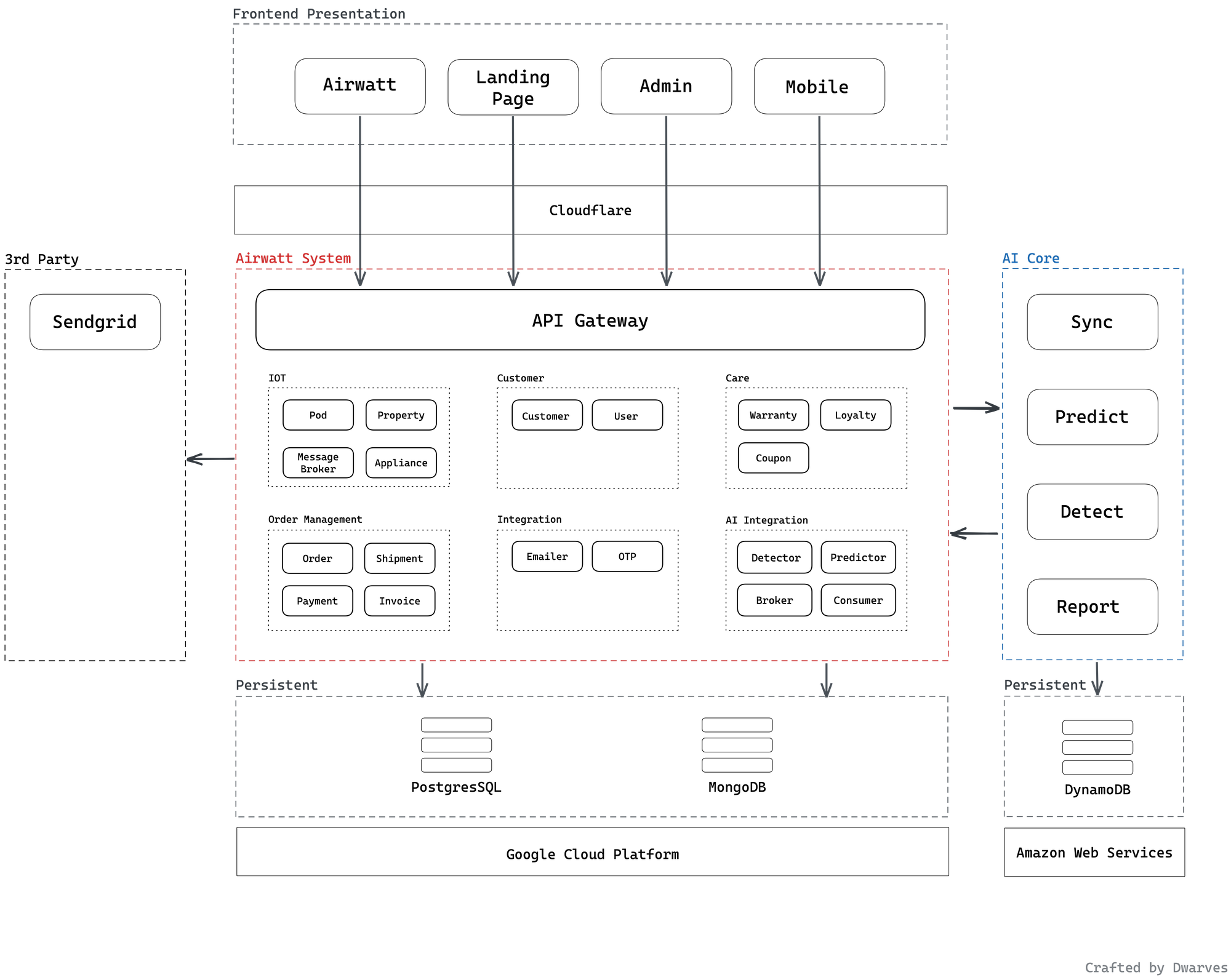 We deploy our system to Google Cloud and Amazon Web Service. The overall Airwatt cloud infra is as below.

We divided our dev environment into 4 separate ones. This set helps developers develop the best technical solutions and resolve issues quickly, and users will only ever notice a new release. We use docker and docker-compose to set up our environments.

For the deployment process, we apply a few practices to make the collaboration more effective.

After three months, we have accomplished the MVP development stage for Airwatt with the following modules:

The next milestone will mostly focus on business development and customizing the web app for a specific domain: FnB. A spinoff to the energy monitor solution for FnB is Airwatt's nearest goal.

Moving forward, together with the Airwatt team, we have released the MVP for the IoT solution. This collaboration brings a significant impact on our partnership. As a result, Airwatt has made its way to the problem-solution fit stage.