During our study about innovation, we find the topic of adjacent possible. Innovation happens but not many people can point out clearly. Getting to know the foundation of innovation helps understanding its natures and could lead to further exploration. Enjoy your reading.

Innovation deepens our knowledge and understanding of the world, it extends our reach and access to resources. More importantly, innovation expands the realm of what we can do with all our knowledge and resources: deliver new goods and products, bring forward new types of organisations and services, and in more general terms develop new ideas and concepts.

Now, expanding any realm always requires leaving its current boundaries in order to explore ‘the possibilities out there‘. But rather than chasing the most extreme or distant possibilities, successful exploration focuses on the immediate vicinity of the current boundaries: Expansion can then occur by naturally ingesting nearby possibilities, by a short stretch of the realm’s new boundaries. Therefore, the adjacent possible is the target of successful exploration and expansion.

The concept of the adjacent possible originates from Stuart Kauffman and his work on biological evolution. Kauffman was particularly interested in the origins of order and the mechanisms that drive self-organization. His findings are broadly applicable to any complex adaptive system, be it natural like the biosphere, or human-made like cities, the economy, or technology. Kaufman investigates how the actual expands into the adjacent possible. The actual describes the system under investigation in its current state, with all its components and interconnections. The adjacent possible contains all the elements outside but near that system; those represent the opportunities for the current system to expand by building new connections and turning those elements into system components.

Now let’s apply this abstract notion to technology and innovation. And let’s take today’s ‘technosphere’ as the actual, comprising all the tools and technologies we use in modern-day societies, together with the knowledge, concepts, facts and ideas required to devise, build, operate, and maintain them. Right outside that ‘technosphere’, in its adjacent possible, you’ll find the space for innovation, for combining known technologies in novel ways, and for developing and implementing novel problem-solutions that yield novel technologies.

The in-going statement frames the very essence of progress: the future flows from the past, we shape it on the foundation of the past. The progress we achieve is path-dependent, it evolves step by step, but it cannot jump. We didn’t go straight from caves to skyscrapers. Galileo didn’t move on to devise radio telescopes. Early cattle breeders didn’t know about genes, let alone think about gene editing. Such developments take time as they go through many, many stages. But all the steps taken for all such developments (including intellectual dead ends, as well as short-cuts, highways, dirt roads, bridges, or tunnels) are available to us today as building blocks for our future.

Such progress is not just a lucky coincidence we enjoy at the beginning 21st century. Since the early days of humanity, our ancestors worked with what they had available to their hands and minds. The only difference between life in pre-historic caves and say, Singapore today is the tremendous accumulation of building blocks that occurred over several tens of thousands of years. That points us to the secret ingredient of human progress: our capacity for social learning. This uniquely human ability allows us to share our ideas –even over long distances in both, space and time– and to build new ideas upon them. Social learning is the ‘secrete sauce’ that got us to where we are to today; and it will pave our way to where we’ll be tomorrow.

To shape our future, we “only” need to find out how we can best combine the available ingredients to get the next task done. That’s what we call progress. And we can make progress in different ways.

To illustrate the different paths we can take to make progress, I’ll borrow the concept of the adjacent possible that Stuart Kauffman originally developed to describe biological evolution, and transfer it to human non-biological development: some call that our cultural evolution, and that’s what I mean with progress.

Let’s start with all the available ingredients I mentioned in the introduction. This collection of building blocks is what Kauffman refers to as ‘the actual‘, and at the scale of humanity, that contains an impressive lot: anything that makes up our economies, our societies, our cultures, our technologies, plus the natural resources we have access to.

Outside of this ‘what we have’ is the realm of ‘the possible‘, i.e., anything we could create by combining some building blocks (those available in the actual) in new ways. This is the realm of ‘what we could have’, but anchored in the reality of the actual. Now think about what happens when one of those ‘possible things’ becomes real, for example, say, the integrated circuit. It immediately becomes a part of the actual, and the actual grows just a little, now that there’s one new ingredient. At the same instance, the possible grows superlinearly due to the myriad of new combinations the ‘old’ ingredients could form with that one new building block. That’s how the integrated circuit gave rise to today’s information technology. That’s how progress breeds yet more progress: new ingredients tremendously expand our possibilities. 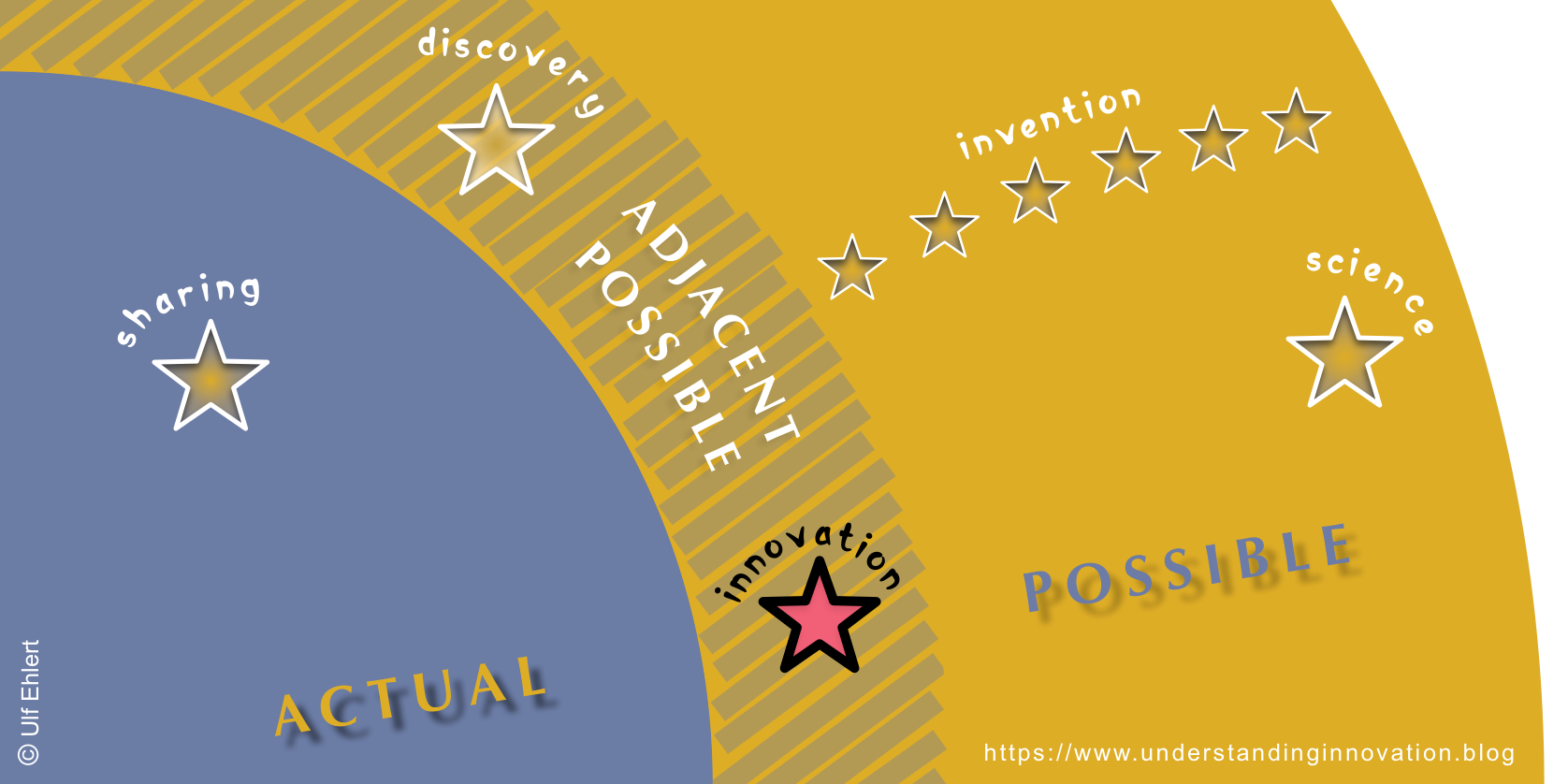 The adjacent possible is the zone stay in between the actual (the current state of the art) & the possible.

But innovation is not our only path to making progress. I’d argue that there in fact five such paths:

The following chart locates those five paths within the scheme of

Sharing – The simplest path to progress is the use of best practice examples and the wider distribution of ready-made recipes. That’s progress for the individual who didn’t know that specific recipe before. Such sharing of useful knowledge does not immediately generate progress for humanity. That’s why this path remains located in the actual. Still, sharing plays a vital as it improves the conditions for further progress to occur. Sharing facilitates social learning: more people knowing more are more likely to generate more –and more useful– ideas.

Science – At the opposite extreme we directly seek to expand the boundaries of human knowledge, to push the limits of the possible. That’s the role of science and in particular of fundamental science, which is committed to enhancing our knowledge and understanding of the world. Though the results of scientific research are often not immediately useful to practical everyday life, science lays the foundation for further, more tangible progress later, for example through applying that newly gained knowledge to address emerging problems.

Invention – As humans we like to pursue original ideas that we believe in; for example, a new method we can develop or a new tool we can create. Some of these inventions turn out to be unattainable, because the underlying assumptions are seriously flawed: think about all the ideas for perpetual motion machines, which must inevitably fail due to friction, heat transfer or other forms of energy loss. However, inventions that succeed can create entirely new technologies (such as Count Zeppelin’s “steerable air train”), and some actually transform human society in previously unthinkable ways (like the wheel or the internet). Because inventions cover such a wide range (you might say: from crackpot to genius), they are located any place in the possible. Hence, progress generated by inventions may take many forms: from quite abstract (learning that the original idea cannot be realized) to very tangible (the original idea actually solves a concrete problem).

Discovery – Sometimes we make an unexpected observation that is difficult to interpret or comprehend. Such discoveries challenge previous views of the world, as they are unintentional (think about Röntgen and X-rays) or even accidental (Columbus setting foot in America, not China). Discoveries are unplanned: rather than us looking for them, they seem to find us without any conscious effort of ours. Therefore, they can only be situated in the adjacent possible, in the space that is within easy reach. As they hit us unprepared, they may cause confusion and give us reason to pause. But wrestling through them, we progress to an advanced level of understanding that, similar to the outcomes of science, provides the fuel for further progress later.

Innovation – And then there is purposeful, intentional work in the adjacent possible, deliberate efforts dedicated to achieving concrete progress. That is when we develop and implement novel problem-solutions; that is innovation as I defined it earlier.

Of course this distinction of five different paths to progress presents a simplified scheme; in real live, these paths are heavily intertwined as they pave the winding road to progress. Sometimes they run in parallel; sometimes they occur in sequence; loops and iterations are always possible. And there are many contributors, some making very directed efforts, some offering accidental findings. Success will only arise from the collective outcomes of otherwise disjointed efforts: innovation draws its punch from all the others paths to progress.

Against this backdrop of the adjacent possible and the different paths to progress, I’ll get closer to the role that technology plays in our innovation efforts. Is it an enabler or in hindrance? What we could realistically expect, and what we should demand from technology? More to follow in the next post.