Firstly, we need to know Go is a concurrent language and not a parallel one. So what is the difference from concurrency and parallelism?

Concurrency means “out of order” execution. Another concept talk about concurrency as the capability to deal with lots of things at once. It's best explained with an example in real life: During playing Dota 2, let’s say, my mom asked me to buy something. Now i stop playing, go to the grocery and then starts playing again with rebuke of my team. This is a basic example of concurrency. In computing, concurrency is represented by the state when two or more tasks can start, run, and complete in overlapping time periods. It doesn't necessarily mean they'll ever both be running at the same time. Multitasking on a single-core machine is an example.

Parallelism is doing lots of things at the same time like other running tasks on a multicore processor. Let’s come back with the example above. Instead of taking order my mother, I play the game and listen to music at once freely. In this case, playing game and listening to music is "lots of things". 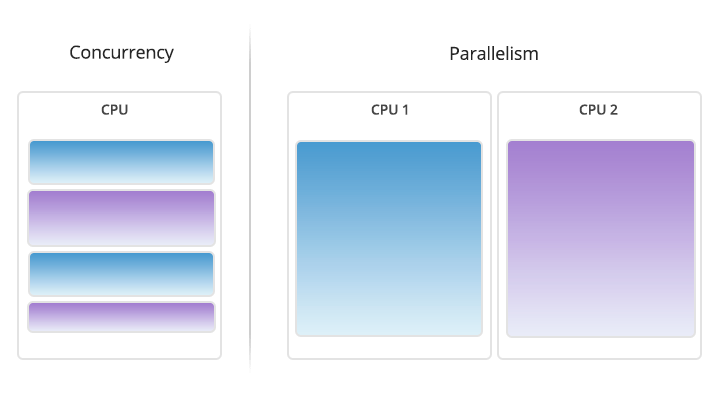 After understanding the way to compare concurrency with parallelism, we can research about Goroutines/channel and other well.

Goroutines can be understood like a light weight thread. Instead of OS, Goroutines exists only in the virtual space of Go runtime. A Goroutines is started up with initial 2KB of stack size (This is the location where store answer of the question "what is this Go routine's current state?". It is contains local variables as well as pointers to heap allocated variables). Because Go’s stacks are dynamically sized, growing and shrinking with the amount of data stored. So we need only 4KB memory for Goroutines. 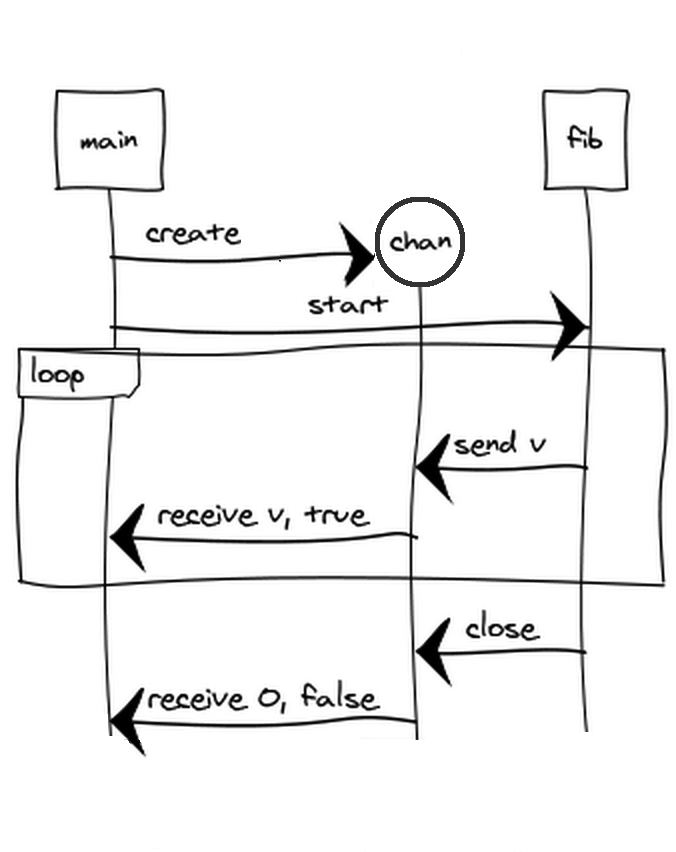 Goroutines are cheaper than others thing like it (thread) in other programming language because of ability growing and shrinking depend on programmer's desire. e.g a Java thread initially have 4MB while go-routine is somewhere around 2KB.

While some languages take an "concurrency at OS level" approach. Go implemented its own scheduler in order to keep concurrency concept at language level.

Channel is a communication tool for Goroutines. Channel can be understand like pipes. So similar to water flows from one end to another in pipes, a Goroutines write data in one end and we can get it in another by using Channel.

Each channel has a type associated. This type decide data type that channel is allowed to transport and no other types can access into it.

In other words, by default Go channel are unbuffered.

So how to break this limit?

Like the way God made Eve from a part of Adam, Go provide another channel type that can buffered.

Capacity should be greater than 0 for a channel to have a buffer and we can send data to our channel until this is full, similar receives will not block when we read data until empty. 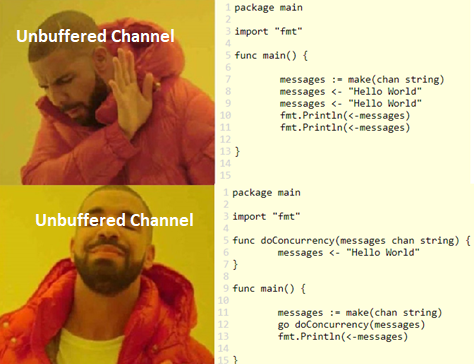 When we implement a Go channel, a struct will be created, then it looks like following.

To have a comprehensive view, we have a few descriptions about the fields encountered in the channel structure. 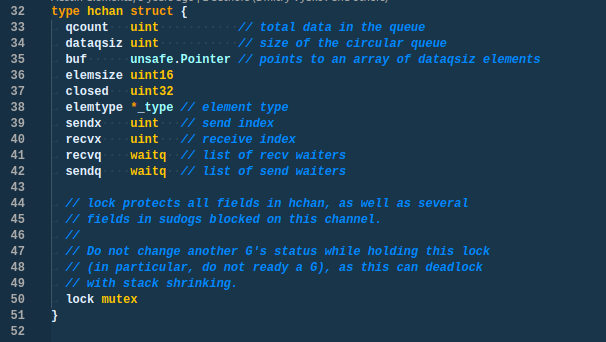 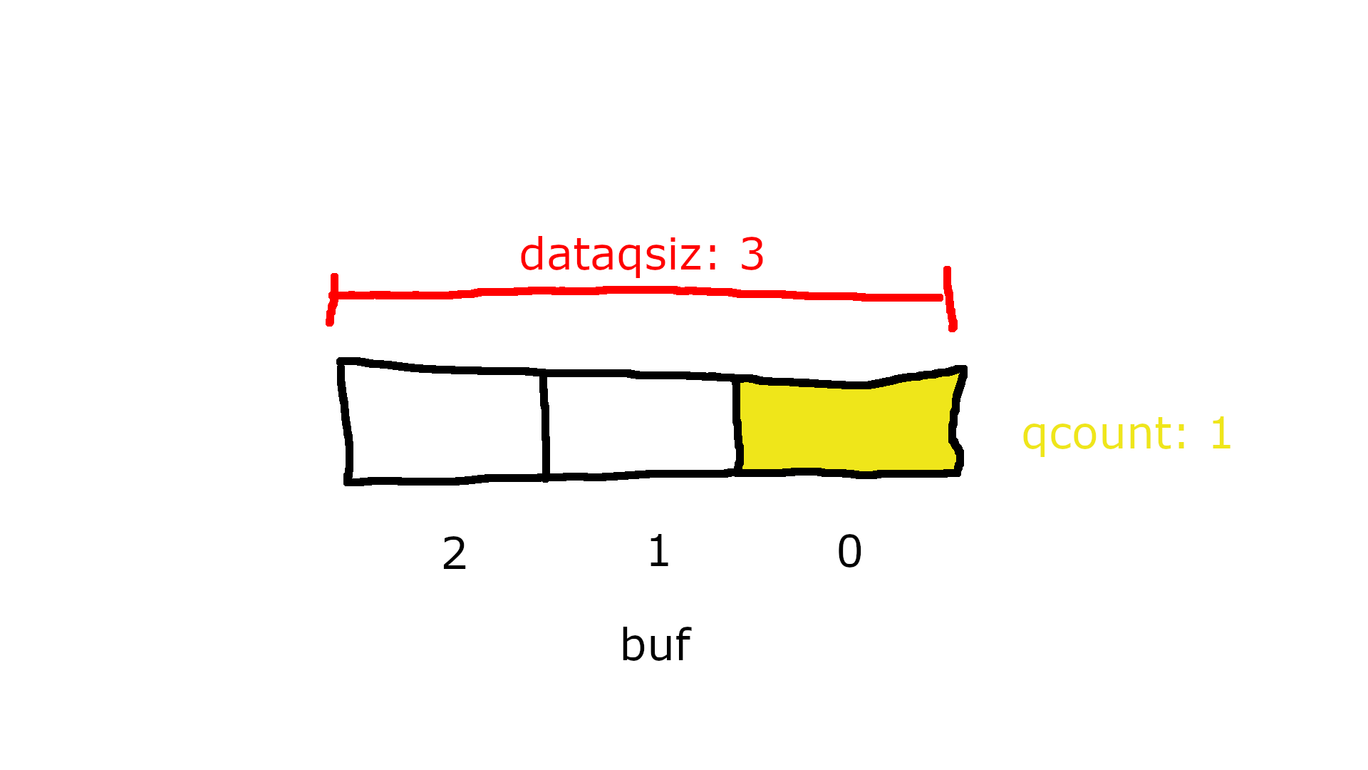 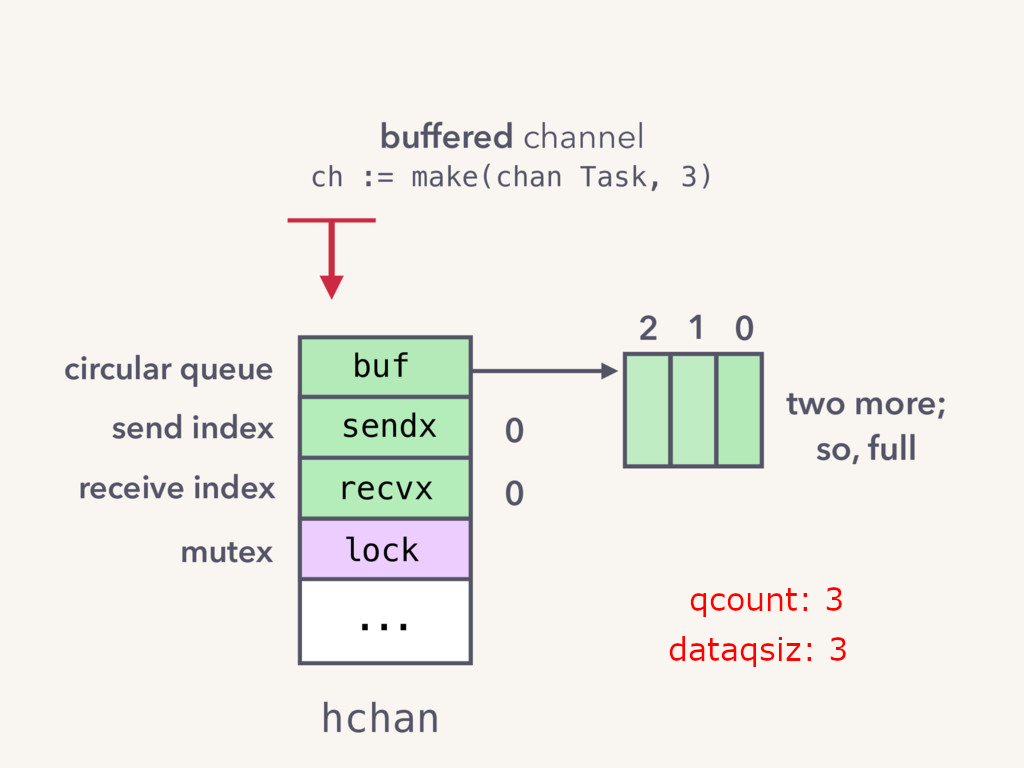 We mentioned about sudog struct above. What is sudog? See the following image: 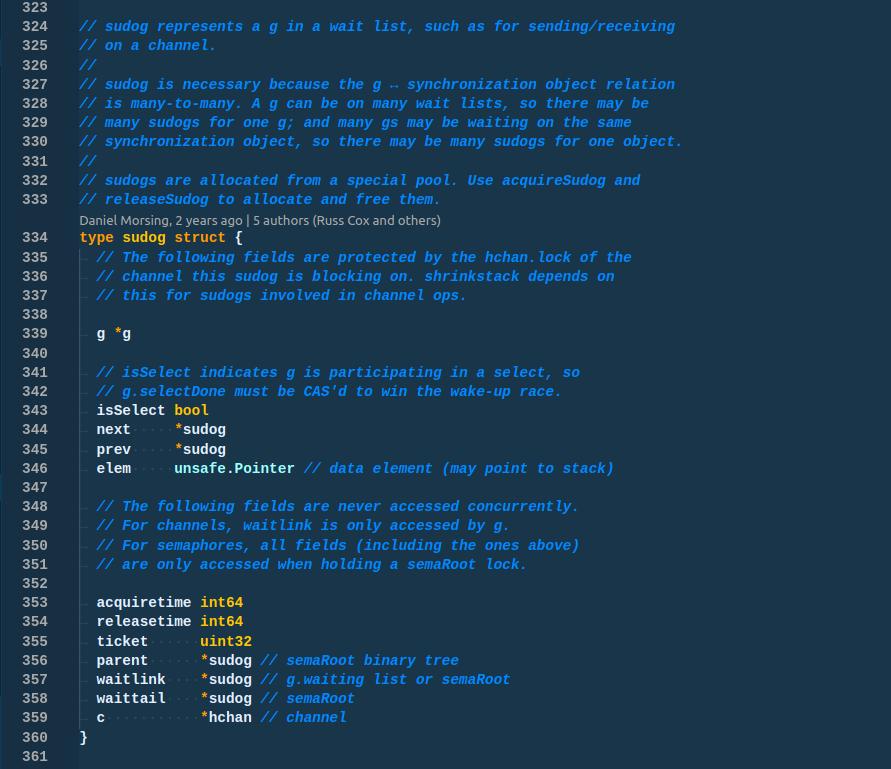 We have a full description for sudog struct in source. If something confuse, ignore it by looking at the original concept. Then we have a good description about sudog: sudog represents a Goroutine. recvq and sendq hold the information on the Goroutines which are currently blocking on the channel while receiving and sending respectively. They are pointers to sudog.

An example to know what happen when we declare Goroutines and channel. 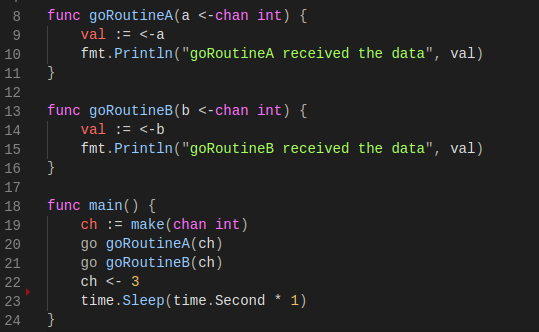 What will be the structure of the channel before line No 22? 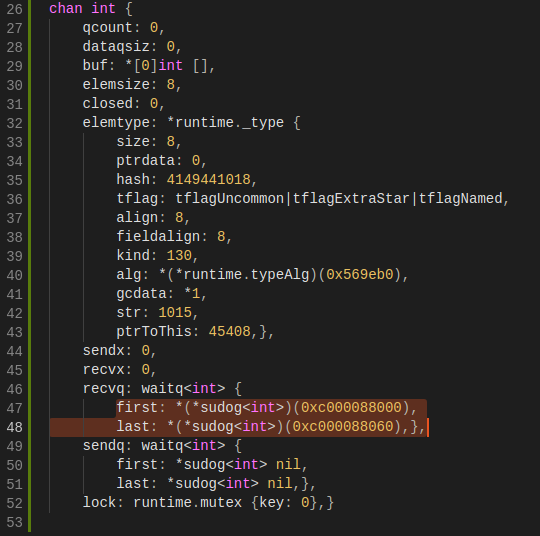 In Our Example Code before line 22 there are two Goroutines (goroutineA and goroutineB ) trying to read data from the channel ch.

Since before line 22 on a channel, there is no data we have put on the channel so both the Goroutines blocked for receive operation have been wrapped inside the sudog struct and is present on the recvq of the channel. recvq and sendq are basically linked list, which looks basically as below: 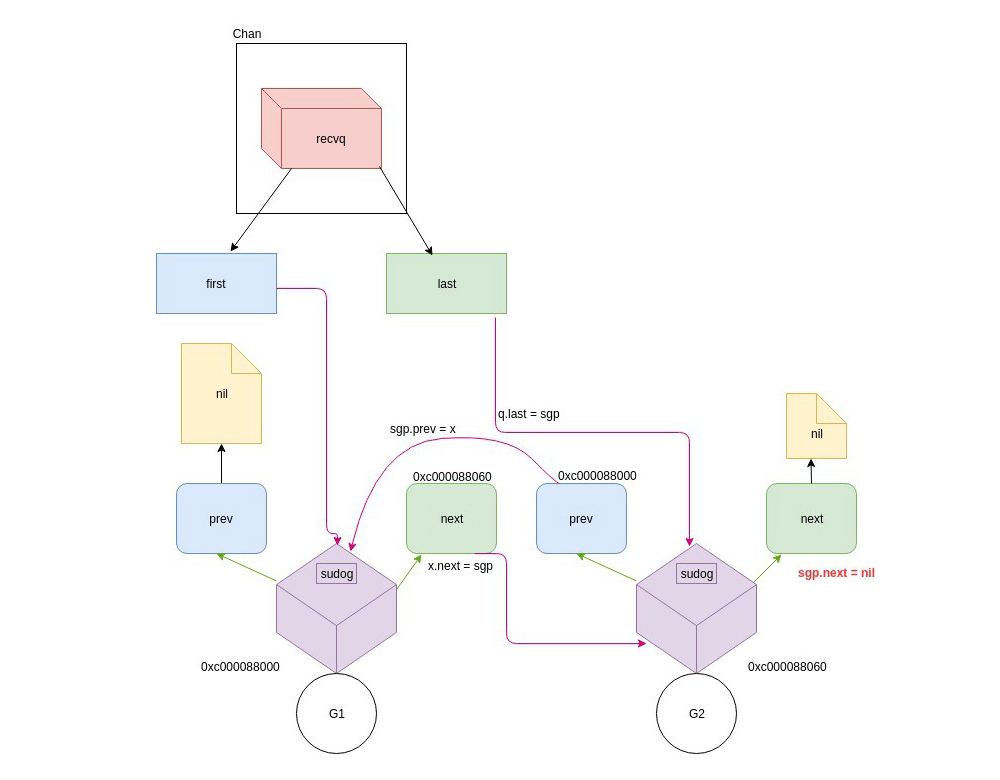 To understand Go scheduler quickly, we will review a few concepts in OS and OS scheduler that support a program is runnable. If you knew about OS thread and OS scheduler, you should skip following section and jump to next part.

Computer Program is just a series of machine instructions that need to be executed one after other sequentially. So thread was born in other to account and sequentially execute the set of instructions it was assigned.

When we run a program, a process is initiated with a thread. A thread have the ability to create more threads. A thread can run parallel or concurrently and keep their own state is safe, local and independent execution of their instructions.

If you are running on Linux, Mac or Windows, you are running on an OS that has a preemptive scheduler. This means a few important things. First, it means the scheduler is unpredictable when it comes to what Threads will be chosen to run at any given time. Thread priorities together with events, (like receiving data on the network) make it impossible to determine what the scheduler will choose to do and when.

Existing a piece called Program Counter in a Thread that allows the thread keep track of the next instruction to execute. 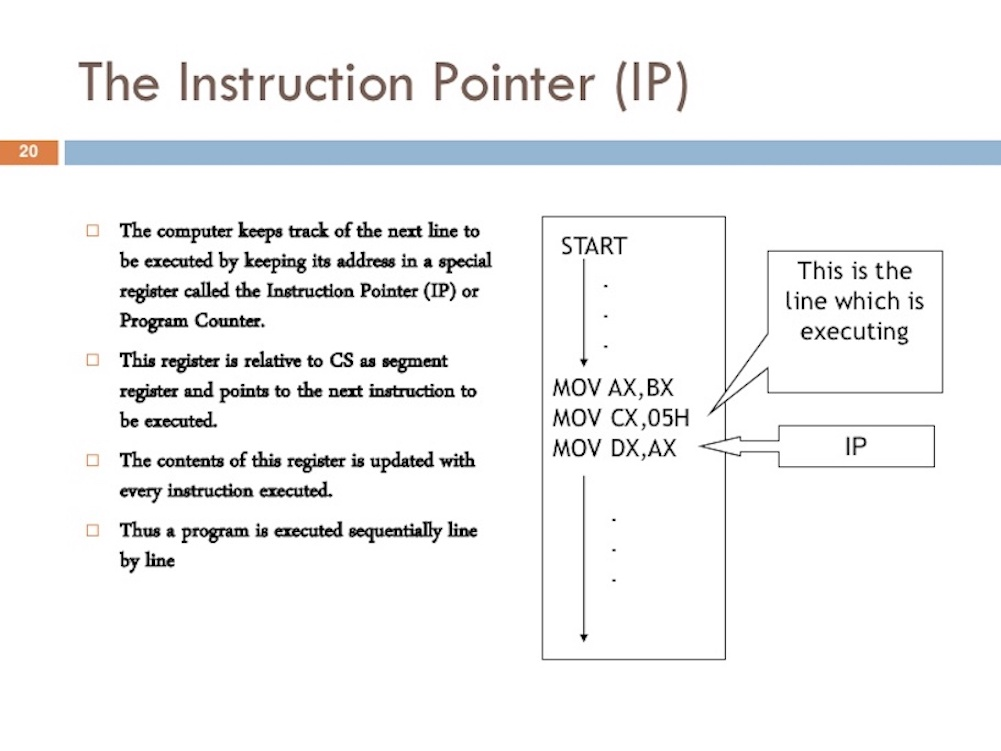 There are 3 states in thread:

And 2 types of work:

Context switches is the duration that we swap a thread on and of a core. It take between ~1000 and ~1500 nanoseconds to do its work while the hardware should be able to reasonably execute averagely 12 instructions per nanosecond per core. So a context switch can cost we ~12k to ~18k instructions of latency. In essence, a context switch make lower performance by losing ability to execute a lot of machine instructions. It look like suitable with IO-Bound work but not with CPU-Bound work that requires work constantly.

After surfing over above all things, we have ability to understand following part quickly. It is the section that describe about GO scheduler and how it make Goroutines faster than threads.

When our program start up, it’s given a Logical Processor (P) for every virtual core identified on the host machine. So how many virtual core exist in your computer? Suppose that we have a Macbook with following system report: 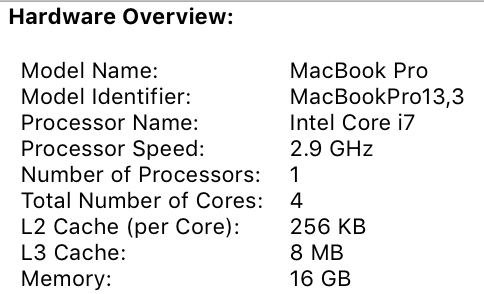 We have 1 processor with total 4 cores. As you see the report don’t let us know directly how many virtual core here. But the Intel Core i7 processor has Hyper-Threading, which means there are 2 hardware threads per physical core. This will report to the Go program that 8 virtual cores are available for executing OS Threads in parallel. In another word, a hardware thread serve for a virtual cores.

Every P is assigned an OS Thread (M) that stands for machine. This means when I run a Go program on my machine, I have 8 available threads to execute my work, each individually attached to a P.

Following figure provides an image of all these components together.

There are four classes of events that occur in your Go programs that allow the scheduler to make scheduling decisions. This doesn’t mean it will always happen on one of these events. It means the scheduler gets the opportunity.